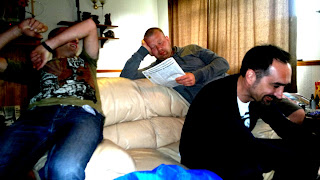 Day 4 was a Sunday and SKAMBOMAMBO saw it was the seventh day and so they rested, content with the work they had made. So what does the band do with a free day? Chat up people and friends on FB, read mags, lounge on Adee's sofa. Laze about, sleep in, stretch your toes and waffle in the bath. Shave. Mundane, run of the mill things on a Sunday far away from home. Not a day to check your accounts. Brrr! 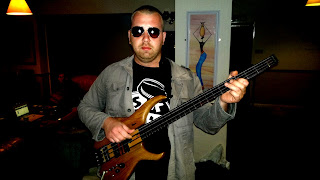 Of Course it could not be so still and quiet for too long. Musicians have big egos and unfulfilled ambitions. Here's the truth coming out. Meet Misiek, in other words Misiek the Pooh our sweet teddy bear on the bass when he's actually SKAMBOMAMBO's drummer. He's even ready to go out on the streets of London promoting the band. XXL Skambo T-Shirt, fits him like a glove.

He's obviously not the only dreamer about. Here's Porek experimenting with a weird instrument he's never seen the likes of before, wishing he was down in Abbey Road and called Porek Lenon.  Yes I guess that would be a good name for him. Anyway there was a jam session on for all the neighbours to enjoy. "Imagine there's no trumpet, and there's only piano, imagine all the people, playing the paino oooh," so Porek sings. 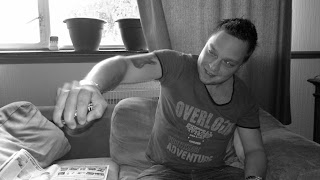 The other hit of the whole tour was a little wrist wrangler called 'Powerball.' It whirred and buzzed all over the SKAMBOMAMBO bus throughout Europe and had now fizzled comfortably into Adee's London hole. Every SKAMBOMAMBO member gave it a real long and good try. By the end it would have wasted itself into a whimper, burnt out by all the guys' twirling around. It's gyroscope went on strike and Pavarotti bought a new one upon arrival. But that's much later. 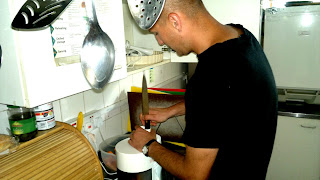 Here's good old Adee with a knife! Getting ready for a Jack the ripper act on SKAMBOMAMBO. The soups and breakfast he prepared for the band were absolutely ravishing. Thumbs up to the chef, not the Swedish one from the Muppet Show but good old Adee. SKAMBOMAMBO's official chef, manager, tourist guide, PR person, bodyguard, all in one. 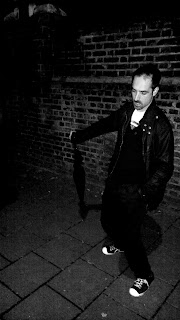 In the evening SKAMBOMAMBO landed in Camden for a bit of a social mix around. This is the story of a band that is out on the road with all the fun mixed up with the hardships of the trade. Penniless, we got offered drinks and a lot of love by people who make the band's effort to survive in this tough music market worthwhile. 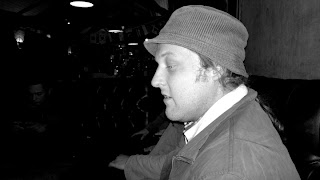