SKAMBOMAMBO Goes to the UK
Don Mario from Malta, who landed in the city of Szczecin Poland in 1998 and has since decided to call it home is the vocalist and frontman of SKAMBOMAMBO. The vision is to create original compositions made, recorded, produced in Szczecin and running under local label Jimmy Jazz Records. As ambassadors of Szczecin Skambomambo wants to show local talent on a national and international stage. It is an ambitious project as Szczecin is a small town, where possibilities both financial and organisational are limited. However this mix of Maltese and Polish blood seems to have gone a long way and this June the Band will be touring the UK promoting its new LP “Made to Specification,” following their debut album “Made in Pol-Ska” in 2008. The new album took 3 years to make. “The reason is due to band reshufflement and the band’s location. Far from Warsaw and all radio, sponsor, management, label potential the band had to work its own long but efficient way. Together with help from the local city council and other institutions, plus a lot of hard work by the band itself, we’ve worked wonders. Just to give you an example. Band members work or study and it is difficult to organise a tour of a week or so for we all have our commitments. For us it is a big sacrifice to leave our families behind, skip lessons or even exams for some, work for others and then return with very little in our pockets. Money is a big word for us, if we do what we do for money then it would make us look quite foolish. Yet this is an expensive sport, instruments, equipment, transport, hotel accomodation, food and beverage on the road. Venues want us to play, the fans are there, but we’re always short of money as the distance from Szczecin to anywhere is huge. We’ve managed to finance our own videos, promotional material, cd recording, production and gadgets. We’ve built quite a big loyal fanbase, but all this takes a lot of time, hard work and patience. If all of you out there think that being in a band is sex drugs and rockn’roll well think again. We would like to thank Sczcecin Floating Garden Project 2050 for their support. Such support goes a long way, not only financially but by raising our moral. This is the way for Szczecin to go, to give and get the support we all need.” 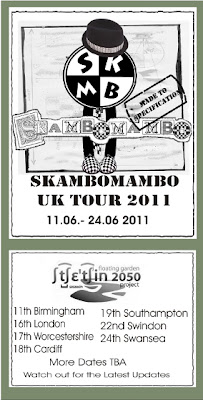 Posted by skambomambo at 16:41 No comments: